Initially we were using it for snagging defects, but now we have expanded it to convert the many paper forms used on site into electronic format, using Field View’s electronic Forms capability, which allows managers to quickly fill out documents on the go.

Designed by architect 3DReid to embody the ethical outlook of the UK’s largest mutual business, this 325,000 sq m, 16 storey glass and steel-clad office building will be one of the country’s most environmentally sustainable, and has already been awarded a BREEAM ‘outstanding’ rating by the Building Research Establishment.

Construction began in July, is scheduled for completion by August 2012, and will require input from over 4,000 workers from 90 different companies.

Throughout the project, main contractor BAM Construct has been testing Viewpoint’s Field View construction project information management system to help speed the completion of many day-to-day processes using a handheld PDA and an internet connection.

The main goal is to overhaul current paper-based working practices, says Andrew Robinson, assistant site manager at BAM Construct: “As a client, the Cooperative Group is keen to embrace new ways of doing things, so we wanted to try out Field View and put it through its paces to see what it could do,” he says. “Initially we were using it for snagging defects, but now we have expanded it to convert the many paper forms used on site into electronic format, using Field View’s electronic Forms capability, which allows mangers to quickly fill out documents on the go.”

The system has already earned its stripes issuing some 600+ hot works permits to subcontractors completing metal grinding and welding jobs on the building’s steel frame. Previously, the permit issuing process was very time consuming – each operative’s permit had to be filled out at a site office, printed off, signed by the operative, counter-signed by a nominated health & safety manager (usually a construction manager), and then photocopied to create a copy for both parties. After completing a shift, the operative would then return the form for signing off after satisfactory inspection of the working area.

“Forms were often returned in a terrible state or not at all,” says Hannah Bryan, business systems analyst at BAM: “Subcontractors were keeping the forms in their back pockets, and in the rain they were damaged or became illegible. BAM also works on huge sites, which makes it difficult for H&S managers to directly see the areas for which they are making permits.

Under the new system, managers armed with PDAs installed with Field View quickly fill out an electronic version of the hot works form on screen, and issue the subcontractor with a barcoded plastic wrist band, scanned by the PDA to pair it with the worker’s personal information. Once work is completed, the band is simply handed back to the manager and the form is signed off on screen.

The new system has several benefits, says Bryan: “It cuts paperwork, it’s a more environmental way to log and store data, and the handheld PDA is user friendly. It saves time because permits can be issued on site where the work’s happening.”

Using scanned wristbands is also more practical, she adds: “A wristband makes it clear to managers at a glance who has a permit to work and who hasn’t ... I don’t think they would want to go back to how they did it before, and the workers on site have said it’s a lot easier.”

Field View is also able to provide a document and audit trail, so for example, a report on an entire week’s hot works permits can be viewed, saved, or printed off from the dedicated Field View website. The PDA can also be configured to automatically send a copy of the permit to a subcontractor’s employer, or the issuer’s employer when docked with an office PC.

The Field View trial in Manchester has now been expanded to tackle various electronic forms including subcontractor request notices, fire inspection notices, health & safety inspections and quality check sheets. There are also plans to develop a form to record and verify on site machinery, explains assistant site manager Andrew Robinson: “We can have 30-40 vehicles on site at one time, which makes it difficult to know which subcontractor is responsible for which machine. From a health & safety perspective, it’s also vital we know that every vehicle is properly serviced and has the relevant valid examination certificate.”

Under the new system, when a machine arrives on site a Field View form will be filled out with its details including model, vehicle type and driver, and a barcode linked to the info will be scanned and stuck to the vehicle. Field View will then automatically alert the BAM manager when a machine is approaching its service date. Scanning bar codes also allows drivers to be identified in an emergency, adds Robinson: “If, for example, a machine is parked in front of an access route, we will simply scan the barcode to identify the firm and the driver and tell them they have to move it,” he concluded. 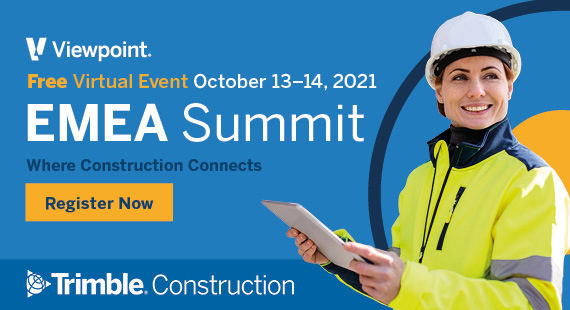 “Viewpoint provides a golden thread of information through from design to project completion.”