Interstate Electrical Services Corp., headquartered in North Billerica, Mass. is a full-service electrical contractor with offices in Connecticut, Maine, New Hampshire, Rhode Island and Vermont. Founded in 1966 by Pat Alibrandi with little more than a desk, a chair and a van, the company has grown to become one of the largest merit shop electrical contractors in New England with more than 600 employees and a fleet of more than 180 service vehicles. The company’s work spans the commercial, industrial, healthcare, biotech, life sciences, engineering and energy sectors. Interstate Electrical Services has been named as one of the top 400 electrical contracting firms in the United States and Alibrandi was a founding member of the New England chapter of the Associated Builders and Contractors (ABC).

When you grow into one of the largest and most respected electrical contractors in New England, you might find there’s no shortage of opportunity. But for Interstate Electrical Services, opportunity also comes with high demands for time, services and the consistent body of quality work the company built its reputation on. The leading-edge company needed a modern construction management platform to keep up with those demands.

Steven Drouin, Interstate’s director of IT services, noted that the AS-400 system and mix of disconnected software programs it was using nearly 12 years ago wasn’t meeting needs. “Just a simple thing like a jobsite address was being entered into six different applications back in the day,” he said. “We were operating under tight time constraints and budgets — just like every other contractor out there. We needed to streamline our processes and coordinate better, both internally and externally.” That led to a software search for a solution that was more focused on construction accounting.

I found we already owned the right software. We just weren’t using it to its full potential. So, we basically engaged almost every module Spectrum had to offer.

Around 2007, Interstate moved from its old AS-400 system to Viewpoint’s Spectrum® Construction Software, which helped the company get a handle on its accounting processes. Four years later, Drouin and the Interstate team began evaluating additional software solutions to further tie together the company’s back office and field operations. The timing was near perfect as Spectrum was in the midst of its own transition — becoming the first construction ERP system to move into the cloud, dramatically expanding the functionality it could deliver to contractors.

“In 2011, we reevaluated our software and what our best options were. We wanted the best software package that could streamline everything we wanted to do,” Drouin said. “After my investigation with all the other ERPs that were out there, I found we already owned the right software. We just weren’t using it to its full potential. So, we basically engaged almost every module Spectrum had to offer.”

That included becoming an early adopter of the cloud version of Spectrum. “We went through about a two-year transformation after we made the upgrade and streamlining the other business processes we were using. The biggest thing we did by using all those different modules was consolidate all of our information to one platform.”

Having a consistent set of data to work from dramatically improved the insight into Interstate’s projects. Drouin said the company uses a combination of Spectrum’s Query Developer, Spreadsheet Server and Spectrum Business Intelligence to deliver in-depth reports and project analysis to teams — whether at the executive level, project managers or the field level — in formats that are relevant and easy to understand.

“Spectrum’s BI tool — we’re using that for project managers and the executive team,” Drouin said. “We’ve created what’s called an executive dashboard. They log into Spectrum, click on their executive dashboard shortcut we’ve created for them, and they have a bunch of different high-level graphs and reports that provide some very specific financial details, which helps them do their jobs better.”

Reports include a list of the company’s top 25 clients and status of work for them, billings, job backlog reports, work in progress reports and labor reports.

Interstate is also using Viewpoint’s Team solution to further connect the back office, field and entire project teams. Viewpoint Team is driving collaboration and productivity by streamlining Interstate’s project documentation between the field and office.

“Spectrum is a great platform as an ERP but was originally built as a financial tool for the finance department. We were trying to get our project managers to use a financial tool built for accounting. Now, Viewpoint Team takes the necessary financial information directly from Spectrum and brings it into a platform designed around what a project manager does every day,” Drouin said. “Every document that project manager needs — every drawing file, every quote document they’ve sent — is stored in the Team platform, prompting them to log in and use that application to
access the information they need. And right when they log into their project, they are getting the financials right in their face.”

Now, instead of the rear-view, we’re looking ahead and projecting ahead of the curve within our system.

Drouin said that prior to using the cloud-based capabilities that the Spectrum and Team solutions provide, the company was mired in manual processes — or using non-integrated technologies that still required manual processes. “We had time sheets being filled out in PDF form, sometimes printed and needing to be scanned in or reentered into our back-office systems. There were always additional levels of repetitive data entry,” he said. “Just looking at the time solutions we have in place now, those alone have saved us thousands of hours of manpower in the office and field. Our superintendents are now reviewing and approving time within minutes versus hours — especially important on big jobsites,
where it could sometimes take a whole day at the end of the week. And a lot of times, that information was going to have to be rekeyed by somebody in payroll after the fact.”

Spectrum and Team also give Interstate’s project teams more confidence in how their projects are being run, and the ability to take immediate action should issues arise. “When we’re doing monthly projections, project managers know exactly where they’re going to be for billings. They know where their costs coming in, labor, materials hitting the jobsite — everything they need, always up to date,” Drouin said. “They can see when something is going south and can address it now before it becomes a long-term issue. Because of that, there is a lot less rework, fewer cost and budget overruns, and fewer time and labor overruns. That allows us to deliver projects on time and on budget more easily than ever.”

Drouin recognizes that many contractors are still wavering on whether to move to cloud-based construction software but added the longer those companies hesitate, the greater the disadvantage to their business.

“Hands down, the cloud is the only way to go nowadays. There’s a stigma in the construction industry to not have your financials in the cloud. But if banks can handle the security to do it, I think we can too,” he said. “The benefits are endless. We have immediate data access as things happen in the field. A project manager can have his coffee in the morning and check the exact status of where his job is — from labor hours to material costs to subcontract costs and more. Before, we were literally looking a month to three months back in time to find out why something happened and what could we do about it after the fact. Now, instead of the rear-view, we’re looking ahead and projecting ahead of the curve within our system.”

Drouin called Spectrum the “best platform out there for construction” and added Trimble’s recent acquisition of Viewpoint has him excited about future construction-specific technology developments and product integration. “It’s awesome because it seems like Viewpoint has a permanent home with Trimble — a leading company committed to technology investment in the construction industry.” 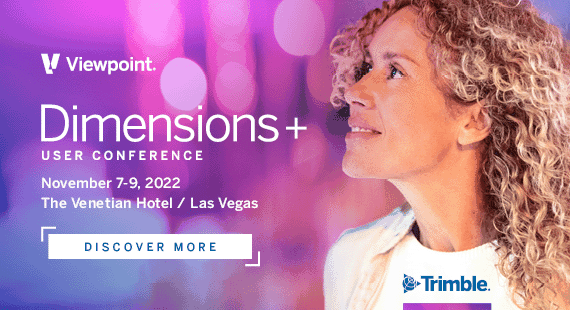