The companies of Beyer Group Ltd. have been using Viewpoint’s Spectrum Construction Software in some capacity for more than 20 years. “At the end of the day, I want to see all my companies in one account system,” and that’s what Spectrum provides, according to Gene Krejci, chief financial officer (CFO) at Beyer Group Ltd. Beyer started using Spectrum in 1999 and, at the time, had a top-of-the-line information technology (IT) infrastructure on-premise. “We had fancy racks in a special room and dedicated air conditioner—but we really didn’t know what we had.”

With three buildings on a sprawling 14-acre campus and about 450 employees in Houston (520, including the Austin office), getting IT right was a major concern for past management. Facing connectivity and power problems on its then remotely located campus were two reasons the company never considered moving to the cloud. “We kept dumping big money into servers,” Krejci recalled. This IT infrastructure was maintained off and on by a third-party IT manager until the events of Harvey in 2017.

Beyer must meet the needs of an “emergency” client base, many of whom need municipal services completed immediately in the wake of disaster or danger. For instance, one company handles emergency infrastructure maintenance: “If a truck driver runs over a fire hydrant in the middle of the night, we go out and fix it.” Another company maintains levees and drainage ditches around the southwest side of Houston, so during Harvey, Beyer was busy with pump stations, inflatable boats, high-water vehicles and helicopters, and didn’t need the added frustration of severed connections from a server room submerged in floodwaters.

Before the storm, Beyer’s website was hosted at an off-site location by its IT manager, while all server hardware was located on-premise at the Beyer Group Ltd. campus. However, outward internet-facing ports were all hosted by the IT manager off-site. So, in order to access Spectrum, employees entered a URL and went through the Beyer website — basically on-campus employees were traveling off-site to the website host at the third-party IT manager’s location and back to their computers on-prem, which proved to be a major weak link during the events of the storm.

“When our website went down, our teams were locked out of Spectrum access,” Krejci said. In the midst of Harvey, Krejci and crews received a large number of emergency contracts that they needed to perform with haste — the safety of about 20,000 homes fell under Beyer’s responsibilities. After Beyer mobilized its people and equipment, the following communication challenges arose:

It was an easy move after the hurricane. We decided to go to the cloud with as much as we could. It took less than a week for us to come to the decision to move.

Communication failures complicated things for the Beyer workforce, but they made it through the storm and came out the other side with a lesson learned. Quickly after the storm, Beyer relocated where its website was hosted and, within a few days, brought email, communications and Spectrum servers back online for remote workers, because the majority of its employees were remoting in.

“We had several post-action meetings with public officials, disaster recovery consultants, documenting everything thoroughly to see how we could do it better next time,” Krejci said. The one thing that kept resurfacing was that server room on-prem, housing the most critical functions of the company. Beyer executives knew they could spend more money to reinstate the server room to pre-Harvey conditions, and even more money on backup plans to protect it in the event of another hurricane ... or simply move to the cloud.

Krejci said management knew what they needed to do … Beyer was headed to the cloud by moving to the cloud version of Spectrum. “The cloud consists of other people’s servers — where they worry about hardware, they worry for us about every second of downtime,” he said, “Next time we’re in a situation, I won’t have to call someone and say ‘go to the office and press this green flashing button,’ while the entire company waits to see the outcome.”

After a storm put their on-prem servers underwater and locked employees out of Spectrum, the system holding their most vital organizational data, it was unanimous that the long-term viability of the company lay in the cloud. “It was an easy move after the hurricane. We decided to go to the cloud with as much as we could. It took less than a week for us to come to the decision to move,” Krejci said.

“We knew this was a thing we had to do, so it made the choice easier to make. I don’t remember [the move] even taking one day. No downtime, and it was truly no different than our original setup, but we noticed that it was snappier, quicker, especially when we were away from campus. We never lost any data, so never had anything to recover,” he said.

The president of one of our companies is 77 years old — we have many generations in one building. But what we’re doing now in the cloud just blows their minds.

Post-Harvey, all of Beyer’s Spectrum data and functionality is hosted in the cloud and nobody knows anything different. According to Krejci, “We never had any downtime and we don’t have to worry about any updates; it’s part of the package.” Now, the only infrastructure located on premise is an internet connection, a backup internet connection, a switch that bounces between the two, a couple of Wi-Fi access points and ethernet switches, “That’s all the infrastructure I have here, because I don’t need anything else,” Krejci said.

Krejci now relies on the convenience of calling on a highly-trained software customer service team, and the comfort of having more than one IT guy who’s working to meet his needs 24/7.

As a result of moving the cloud, Krejci says the majority of his project managers (PMs) now use laptops, since they’re no longer chained to their desks or reliant on data delivered through an on-prem server room. Before the cloud, PMs would drive to the office at 5 a.m. to do 45 minutes of paperwork before heading to a project or jobsite, spend the day on-site, and then return to the office around 3:30 p.m. to finish up before heading home. Now, with improved off-site connectivity and accessibility to the data and tools they need to work anywhere, any time, the company is investing more laptops for PMs who want to be more mobile, rather than server towers anchoring employees to campus.

To companies still resisting the move to the cloud like Beyer once did, Krejci offers a friendly warning, “What I have now that they don’t is time. With these technology changes, I can move quicker than they can, and there are going be some bigger changes in construction technology soon, so, if they’re not already in the cloud, they’re already behind.”

Beyer was started by Krejci’s uncle in 1983. Many of the original staff still work there, with about 50 or more employees who have been there for 25 years or longer. “We’re very much an old company, and we’re kind of the new generation,” Krejci said of himself and his cousin, who helped start many of the Beyer Group Ltd. entities that serve customers today. “It’s kind of a joke around here: you’ve got the father’s company and the son’s company. We’re not quite millennials, but we had email in college.

When I got here, [the company] was still fax-based. The president of one of our companies is 77 years old — we have many generations in one building. But what we’re doing now in the cloud just blows their minds.”

In hindsight, Krejci acknowledges that it took too long to get old systems back up and running after the storm. Moving to the cloud was a decision that now brings confidence, certainty and comfort to managers and employees in their daily work lives.

“We chose Viewpoint and Spectrum and I’m very happy with that choice.” For Krejci now, the move to the cloud was one he would make again, hurricane or no hurricane. “Viewpoint cloud is so easy and so well managed that moving to the cloud is such an easy step,” he said. “To me, the only option is Viewpoint cloud. They will grow with me, so I don’t need to look anywhere else.” 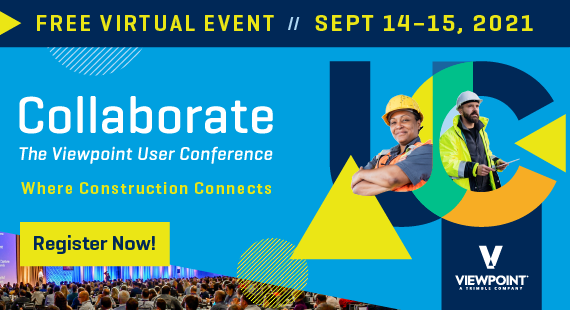 “We’re not only able to win more jobs, but our jobs are a lot more profitable.”