Debunking 5 Myths of Construction Management in the Cloud

Don’t Let Misconceptions about the Cloud Hold Your Company Back

However, many construction companies remain skeptical about switching to cloud operations. Hesitant construction managers and decision makers often cite a few common reasons for their lack of digital transformation. Luckily, these concerns are often rooted in myths. Here are five fallacies about moving to a connected, cloud-based construction environment.

1. Moving to the Cloud Will Disrupt Business

Digital transformation does take a bit of time and commitment, but not as much as some might assume. The myth that cloud transformations disrupt business operations stems from the early days of the cloud. Implementations are much more streamlined today, so construction companies often don’t have to do much heavy lifting, as cloud vendors and cloud-based implementation workflows help ease transformations

Most of the time, cloud implementations won’t disrupt business at all. This is where working with a single professional cloud vendor can be highly advantageous. A high-quality vendor will guide clients through every step of the process—from identifying data and functionality needs to user roles and customizations. When it comes to the actual implementation itself, leading vendors can often switch systems over in as little as a single weekend, avoiding any key business disruptions. 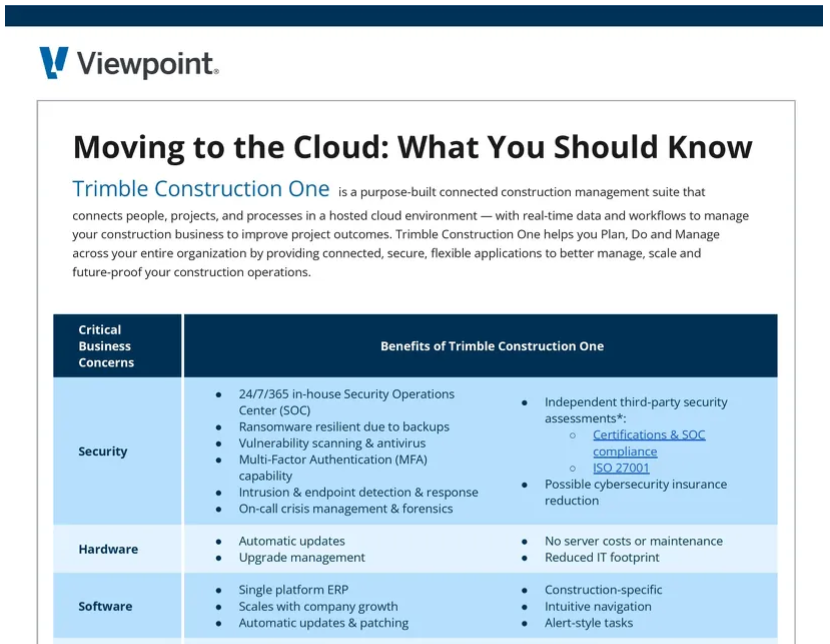 Moving to the Cloud with Trimble Construction One — What to Expect

2. The Cloud Is Untrustworthy

Some people unfamiliar with the cloud see it as untrustworthy because of stoked fears that data is easier for hackers to access. After all, if cloud-based data is simpler for construction teams to access, doesn’t that mean anyone can get in, even those with malicious intent? Not necessarily. In fact, the cloud can actually provide much stronger cybersecurity and data protections for construction companies.

The cloud has a few key security advantages compared to conventional servers, whether on-premises or off. Hosted cloud servers are managed by vendors’ dedicated IT experts, so data stored there always has the latest security protections. This includes powerful tools like identity and access management, multi-factor authentication, and even AI threat monitoring. Plus, since the cloud is highly connected, security staff can easily monitor it around the clock, making it difficult for hacking attempts to go undetected.

As a result, the cloud is actually more secure than most conventional on-site servers. The myth that the cloud is not safe stems from the idea that typical servers are isolated islands, which is itself a myth. Hackers actually target companies that use on-premise servers first because they are much easier to breach than the cloud.

Once the server is breached, it is easier for the hacker to ransom any stolen data since it was only stored in one place. In contrast, information stored in the cloud is seamlessly backed up so that even if an attack occurs or a server goes down, contractors can switch to a backup with complete data and keep working without worry.

3. Moving to the Cloud Is Too Expensive

Another common myth about the cloud is that it is expensive to move to. While it may seem that way on paper at first, connected, cloud construction solutions can save construction companies significant money in operating expenses and drastically reduce project costs. The expenses associated with manual construction workflows, continuing to manage multiple, disconnected software programs, maintaining on-site servers or third-party IT contracts, and all associated project and business inefficiencies can end up being more than triple the cost of operating in the cloud.

And, a connected, cloud construction suite provides a scalable platform for contractors to continue to take advantage of the latest technology innovations like data analytics and business intelligence solutions, artificial intelligence and machine learning capabilities, predictive modeling and forecasting and much more. At the end of the day, it’s NOT moving to the cloud that is too expensive.

Expenses associated with manual construction workflows, continuing to manage multiple, disconnected software programs, maintaining on-site servers or third-party IT contracts, and all associated project and business inefficiencies can end up being more than triple the cost of operating in the cloud.

4. The Construction Workforce Will Resist Change

Some construction managers and contractors are hesitant to switch to cloud solutions because they worry their employees won’t want to use them. Many people can be frustrated by change, particularly in the workplace. However, this often stems from poor communication, a lack of clear purpose for change and messy implementation of new technologies. Switching to the cloud does not need to be like this.

Many construction employees already use the cloud in multiple aspects of their daily lives and don’t even realize it. Streaming TV shows and movies, online banking, online music platforms, social media, and thousands of apps and features on everyone’s smartphones are all examples of how connected cloud technologies have made lives easier and information more easily accessible. Communicating this to workers can help them realize the cloud is not some complex new technology.

Cloud implementations can also go more smoothly when the company has a technology advocate, and construction managers and company leaders communicate the benefits of the switch to their teams. The industry is all about getting things done well in the most efficient way possible. The cloud is perfect for this. Leadership simply needs to ensure everyone understands what they will personally gain from the change. It also helps to offer tech assistance and training for those who may fear they won’t know how to use new programs or technologies, which leading cloud vendors can easily provide. 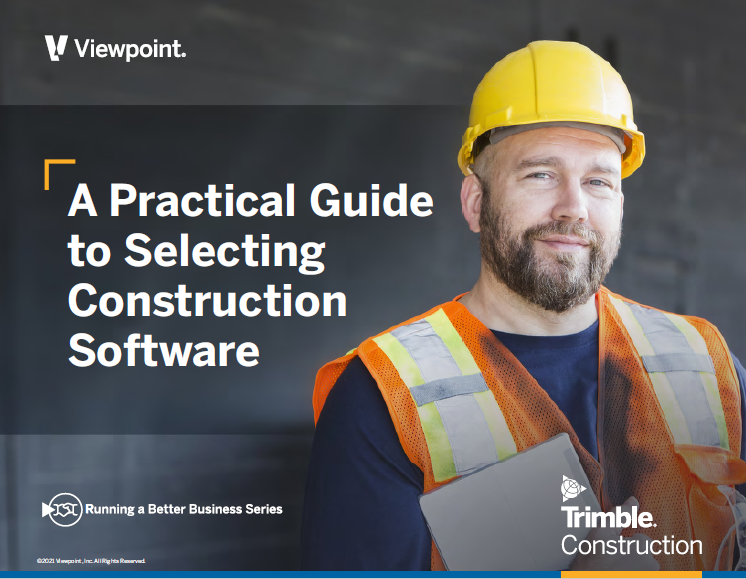 Get Your Complete Guide!

Ready to Take Your Company to the Next Level? We’ll Walk You Through the Steps!

5. The Cloud Is Not Reliable

A common misconception about the cloud is that it is unreliable. People may fear that their data will somehow disappear without warning or that the cloud could go offline at any time. The reality behind this myth is that the cloud is more reliable than on-premise storage. It allows construction companies to bounce back from cyberattacks and natural disasters much quicker than on-site servers.

The cloud can even make disaster recovery less expensive and time-consuming since it is more resilient than conventional data storage. For instance, on-premise servers would likely be destroyed or severely damaged if a flood hits a construction company's office. Information not routinely backed up, which would have to be done manually, would be lost. Even if it could be recovered, the process could take days or weeks, resulting in expensive delays.

In contrast, good cloud vendors will provide automatic backups—ranging from as soon as immediately after new data is entered to multiple times per day—with speedy information recovery in minutes. Cloud data hosted by trusted vendors is stored among numerous servers in safe locations so no single event could destroy it all. Plus, moving to a new office or location after a disaster, or to a new project jobsite, is as easy as simply logging into the connected software suite.

Why Construction Management in the Cloud is a Must

Cloud-based construction management lets professionals do their jobs safer, smarter and faster, with better ebd-results and profit margins. So it’s no surprise that more and more project owners—especially government-funded projects—are requiring contractors to use cloud-based workflows when awarding contracts.

Owners are more involved than ever, and want to see real-time reporting, reduced mistakes and inefficiencies, true collaboration across all project stakeholders, and much more. These needs cannot be met with those manual and disconnected technology workflows contractors have managed to get by with to this point.

As nearly all businesses and industries transition to the cloud, contractors that wait too long, could be at a disadvantage when it comes to winning tomorrow’s work, placing their own businesses in jeopardy.

Not sure where to start? Trimble Viewpoint can show you where to begin. Connect with us today!

Rose Morrison is a construction writer with a passion for sustainable building and innovative construction technologies. She is the managing editor of Renovated.com and regularly contributes to a number of reputable sites, such as NCCER, The Safety Magazine, and Geospatial World.

The Future is Now: Why Connected Construction is a Game Changer