Dave Steel Company has been fabricating structural steel for American industry since 1929. Starting with a small shop in Asheville, N.C., the company played a pivotal role during World War II, manufacturing components for the landing ships that would carry American GIs to the beaches of the Philippines and Normandy. After the war, Dave Steel Company expanded its presence in the construction industry by serving commercial and industrial customers throughout the eastern United States. 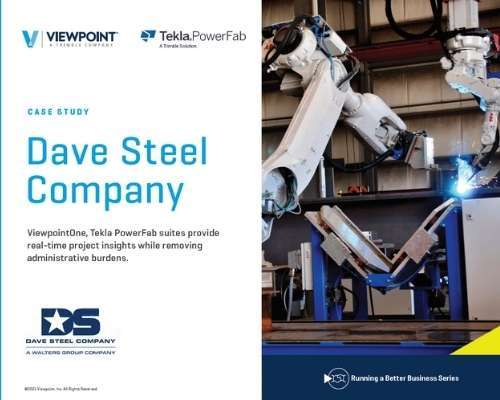 Today, the privately-held steel construction company — with the help of its sister companies within the Walters Group — works on a variety of key construction projects throughout North America. To keep pace with modern demands, the company has turned to data-driven technologies to better manage its business operations and drive continued innovation.

Babette Freund, Dave Steel Company’s executive vice president, recently talked with Viewpoint about its technology journey, including moving to the connected, cloud-based Trimble Construction One suite (formerly ViewpointOne) of construction solutions. Below are a few key snippets of that discussion.

Hear Freund discuss how connected data between the Trimble Construction One and Tekla PowerFab suites of construction solutions is helping her company better integrate its accounting and project management operations to achieve better understanding of projects and save valuable time:

Dave Steel Company on the Power of Connected Data

As Freund notes, “knowledge is power.” Watch her discuss the power that real-time, connected construction data will bring to the table for her organization:

Dave Steel Company on Moving to the Cloud:

How easy was it for Dave Steel Company to transform its operations and move to the cloud? Freund breaks down the process and the benefits operating in the cloud will bring:

Learn how the connected, cloud-based Trimble Construction One suite can improve the lives of every construction professional in this role-based breakdown of benefits.

Why Great Basin Industrial Moved to the Cloud with ViewpointOne