Last week, we shared a few tips for Trimble Viewpoint’s Vista ERP—pulled from clients who use the technology on a daily basis—that we thought helped highlight some of the most interesting ways that contractors are using Trimble Viewpoint software to save money and create greater efficiency for all project stakeholders.

Read on for some great Spectrum ERP tips that should offer users plenty of food for thought—from cost savings related to moving on-prem software to the cloud, to advanced job costing and billing workflow tricks that build on Spectrum’s vast capabilities. We’ll cover a few of these below..

Let’s get right into it, starting with the benefits of moving to the cloud.

A deep-dive session with Robert Kruse, director of financial software systems for MDU Construction Services Group, uncovered a bevy of factors that helped his team determine how adopting the cloud version of Spectrum would create savings. Further, the team was able to continue building on efficiencies by using Spectrum because of the time savings that the software was already offering the team.

“We were able to dig into Spectrum and find answers, create reports, new workflows . . . basically [we] quit using some other tools because we now had time to better understand the features of Spectrum and how we can better use it,” said Kruse of the value that Spectrum brings to MDU. “Just never looked at it, never had time, and now some of those wishlist items can begin to work their way into the queue because we’re no longer spending so much time just testing the service, testing our backups, and the gamut of other things that we had to do before [with on-premise].”

Basically [we] quit using some other tools because we now had time to better understand the features of Spectrum and how we can better use it.

Kruse said that in conversations with other clients at different user group meetings, he was able to determine new ways of looking at how on-prem software was dragging on the business through extra, unnecessary costs.

“These unnecessary costs basically revolve around storage, performance, availability, and redundancy,” said Kruse, discussing the costs of on-prem management. “If we want to go beyond the bare minimum of just having Spectrum running on a server, you can do things very economically, but there are also fewer protections.”

Ultimately, moving to the cloud proved superior from both a cost and efficiency perspective—as well as security.

“This sort of gets down to the root level of, would we trust this organization to host and secure our data?” said Kruse. “When you talk about Spectrum, you're talking about the most sensitive of our data.” 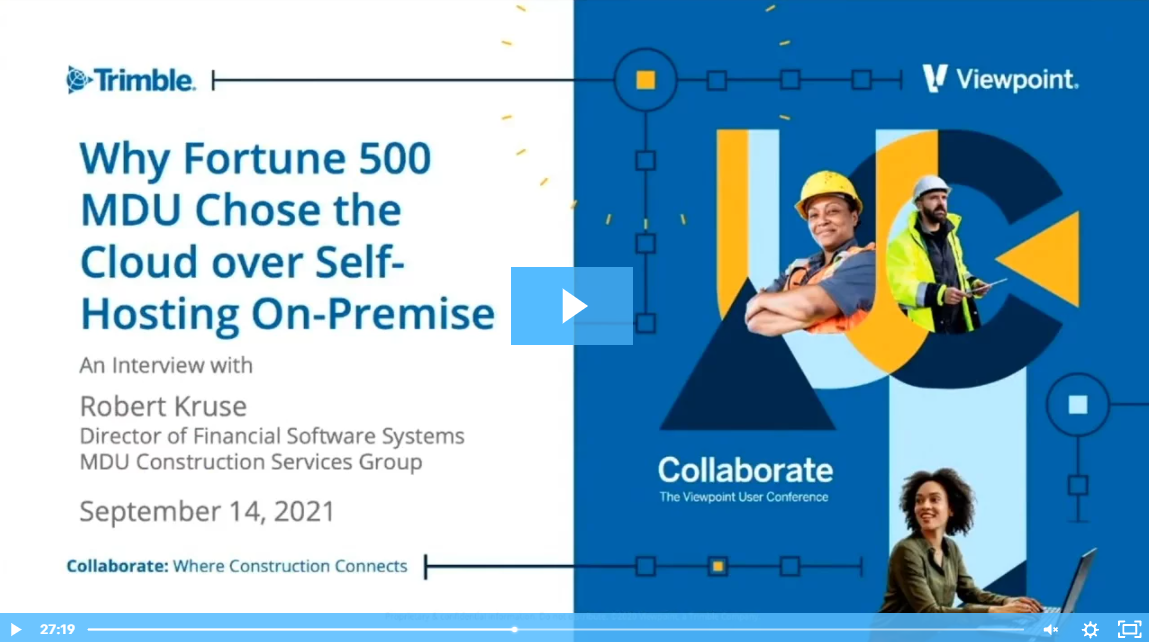 There are four major benefits to accurately projecting job costs in Spectrum:

Geoffrey Falk, senior product manager for Trimble Viewpoint, says these factors are critical to ensuring that the expected outcome is in line with what’s happening during the course of a project.

“Projections give you the ability to highlight things that need corrective action,” said Falk. “If you see a phase in which the costs are going up and that shouldn’t be happening, you can round up the troops and figure out what kind of corrective actions you can take to get the job back on track. If you’re projecting things in the early days of the job and something has happened—either your costs are out of control, the estimate was overly optimistic, or there are change orders that you forgot—it’s easier to do that earlier in the job.”

Likewise, it’s important to track the profitability of a job throughout the cycle of the project (not just at the end) to ensure that there are no surprises.

“It always freaks me out when I hear people don’t look at the profitability of a job until it’s done,” says Falk.

It always freaks me out when I hear people don’t look at the profitability of a job until it’s done.

Mary Gaines, AIS director for Ace Electric and a Spectrum user for more than 20 years, laid out a few additional tips for creating a good projection:

“The reality is, so many people can’t tell you how many hours are left,” says Gaines. “If you estimated labor at $25 an hour and your average wage rate is $28.50, you’re losing $3.50 an hour that you weren’t counting on. That affects estimates and projections. So I think it’s important that you go ahead and review every month where you are on that.” 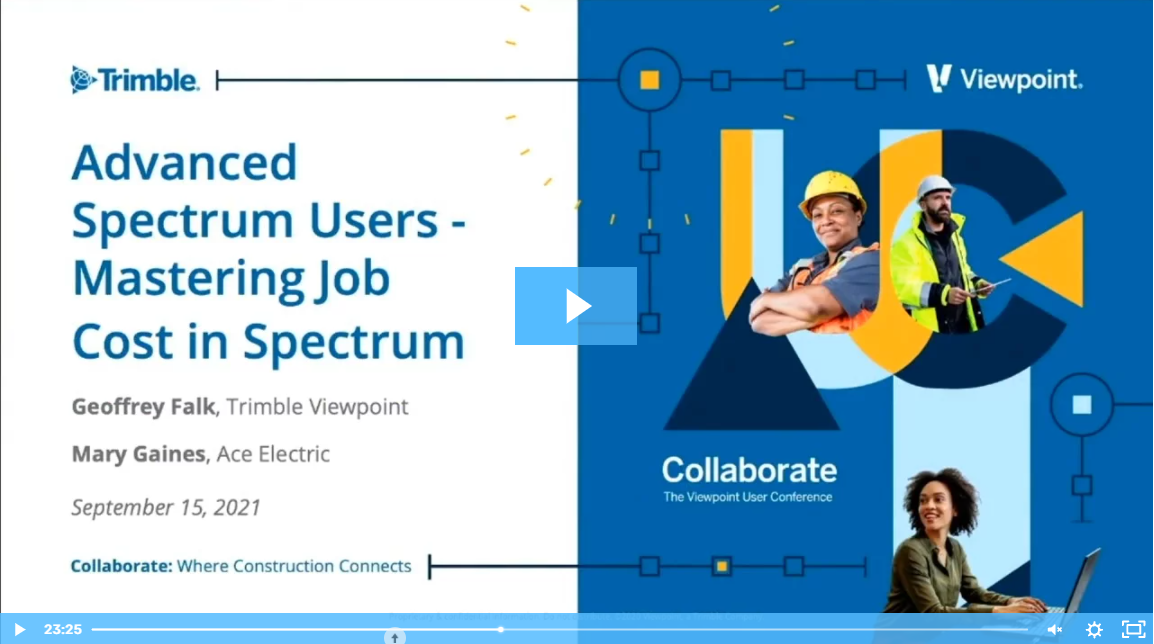 Feyen Zilstra’s payroll team needed to be able to review all timecards for a payroll cycle from a variety of sources, whether unapproved, approved, or already updated to the cycle.

“We have had all kinds of different tools involved in time collection over the years,” said Rick Siner, director of information technology of Feyen Zilstra, a building equipment contracting company.

When he arrived at Feyen Zilstra four years ago, Siner decided to take a hard look at some of the issues they had generating accurate time for their employees—clearly an important issue for both management and employees.

Over a six month period, Siner was able to set up and implement daily reports to help account for individual work times. During that time, Siner found that a number of their applications had various timecard data being entered.

“One of the things that we ran into early in that process was that time was being keyed into a data report, and into another individual time app, and we still had data going into Spectrum,” said Siner. “It was cumbersome to edit timecards for five to 700 employees, and it also became easy to miss some of the controls we have in place. We would test the data, as well as manually review.”

The beauty here is that edits can occur before it gets submitted rather than trying to edit one line at a time.

With Spectrum in the cloud, Siner’s team was able to consolidate that data, which allowed payroll to follow up more quickly—sometimes even before the submission is complete.

“When they’re all done with that review or when the review is to a certain point, they can then programmatically push this into the pre-time card environment,” said Siner. “The beauty here is that edits can occur before it gets submitted rather than trying to edit one line at a time.” 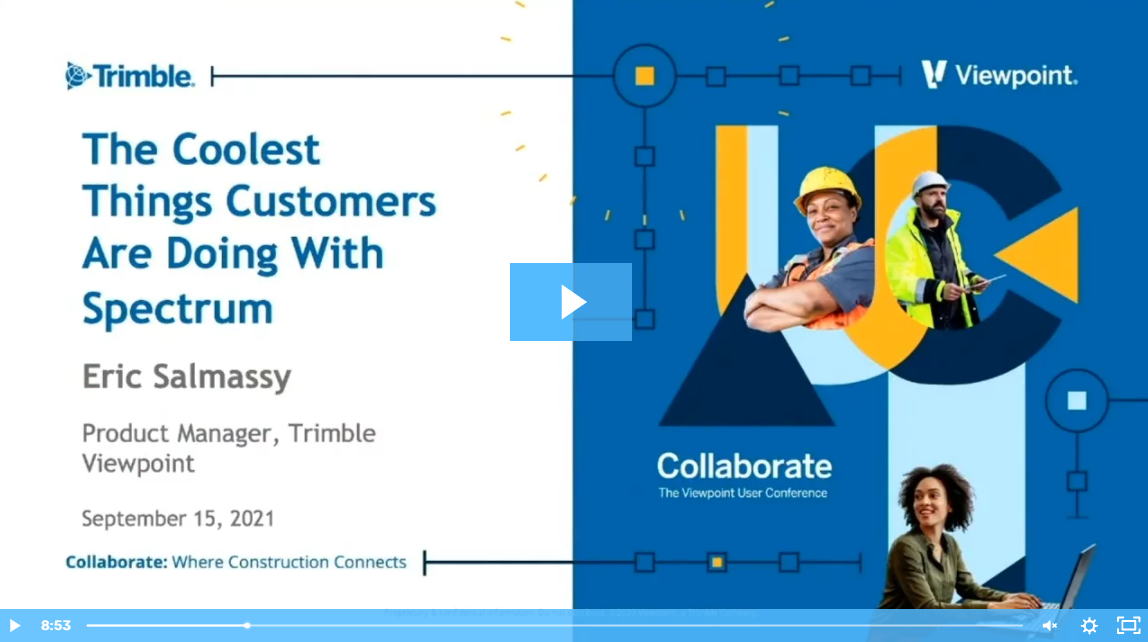 Trimble Viewpoint’s Spectrum solution is part of the new, connected Trimble Construction One platform, which was officially unveiled at Collaborate. .

Watch this video below for more:

Ron is a Content Manager & SEO Strategist for Trimble Viewpoint. A professional writer for more than 10 years, his focus is now on showcasing the benefits of the industry's top connected construction software platform: Trimble Construction One.

Here are some related blogs you may enjoy